Opting for a more traditional marketing medium other than digital has proved to be an effective strategy for the e-commerce brands like Amazon,Flipkart, e-bay and many more.

It might seem counterintuitive but it also speaks to the limitations of digital media or even e-commerce in that you can’t reach everyone from the general population every time just through digital media alone. In a marketplace swarming with sellers, sometimes traditional approaches like television advertising are critical for getting the message out and spreading awareness about the brand.

TV advertising forms a significant part of media mix for these e-commerce brands. By advertising through this traditional medium the traffic of their portal increases and so does awareness and trust. These ads have helped to break the clutter and to reach across all target audience which has been achieved by targeting different channels covering all the genres and different languages. 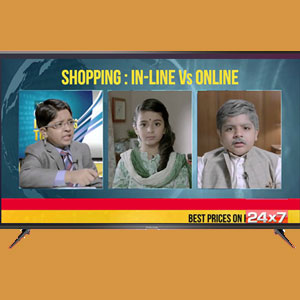 There has been a spurt in traditional advertisements by e-commerce sites and this is primarily because mass media such as television tends to bring more credibility and ROI. There is every reason to believe that these trends will accelerate, which will dramatically transform the consumers interaction with marketers.

The TV is working well as a major marketing channel:

TV is important in a country like India & tech startups do not run away from building brands in an old-fashioned way. The Indian startup ecosystem is unprecedented since mid-2014. The ecosystem expanded 50X in just 5 years. Research says that e-commerce companies alone will spend 10,000 Cr in ads this year 2020 & it is growing at 20%+ annually. The number of advertisers involved is 100X more than what it did in 2015. A rough count as much as 50 e-commerce companies have been advertising on TV. India’s top 50 e-commerce firms spent ₹ 1,500 crores on television advertising in the year 2019, a 40% increase over last year, according to data released by TAM Media Research Pvt. Ltd. 60% of advertising costs incurred by start-ups were on prime-time spots on TV. 40% of the spending was on TV commercials on non-fiction channels.

We make your brand transform its vision & achieve the objectives using television advertising campaigns. A tv ad agency which provides all-inclusive TV advertising plans, everything you need – advert, airtime & analysis. Ensure that creative and media arms are working together to achieve the best possible & sustainable routes to market your brand.